This art project was originally conceived as an alternative to the annual “Inktober” event where artists are challenged to complete an ink drawing during each day of October.  I completed thirty-one drawings, all done in ink on watercolor paper.  The official “Inktober” prompts were not used. The prompts for this project were birds named in honor of people I found to have some rather dishonorable beliefs, actions, or outcomes from their actions.

I came upon the idea of “dishonorable” people whose names are now linked to living organisms through the hobby of birding.  I had often wondered about why some birds are named for historic people I knew nothing about. Some names, like Audubon, are well known to even the most casual birder.  But others, Spix, Jameson, Bendire, Couch, etc., have stories even serious birders and some ornithologists don’t know.

In August 2020 the name for the McCown’s Longspur was changed to the Thick Billed Longspur.  McCown was a Major General in the Confederate Army of the United States and the name change for this bird was a response to the current movement to take down honorifics to those who fought in the Confederacy, a government formed to promote an economy based on slavery.  I wanted to know if other birds were named for people whose lives were less than honorable.

Through the magic of the internet I was directed to the site “Bird Names for Birds.”  I found out that a serious and well researched movement was in place to tell the stories of the people honored by having their name placed on a bird. The goal of “Bird Names for Birds” is to remove honorific bird names.  This website includes biographies of people who have birds named for them.  Almost all the biographies include some pretty grim actions and beliefs expressed by these historic people.

Given that I had set the goal of one drawing per day, I was hard pressed to find information on the people whose names are now permanently attached to birds.  I relied heavily on the biographies in the “Bird Names for Birds” webpage.  However, I did try to find more information when I could, but I was often stymied by paywalls that prevented me from reading more than abstracts of scholarly papers. I was also trying to find images to use as references for my drawings. These were not easy to find, so some of my images include imagined clothing, settings, or events. 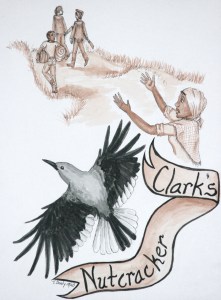 I also began to notice a spin on some of the stories of the people honored by bird names.  The brutality of slavery, conquest, colonization, racism, white supremacy, and the science sometimes used to support these institutions and beliefs was softened, deflected, or even ignored when talking ornithology and nomenclature.  This whole project turned from an interesting way to present birds in history (my original goal) to a crash course in historic human cruelty.  There were days where to background story of a bird name revealed horrors I was not prepared for.  I had no idea that “the brave explorers” who collected wildlife and plants for science in countries new to them, were often so completely awful to the humans in these “new lands.” I imagine I am not alone in being ignorant of these stories, but I still may give voice to the names of the perpetrators when I identify a bird.   This horrified me to the point of nightmares.  Sometimes I could not even draw.

The way I came to terms with this brutal history, and its strange association with blameless birds, was through a drawing formula of my own device. The birds are drawn in a prominent position in a realistic way.  The honorific names given these birds are on a scroll.   The dishonorable acts of the birds’ namesakes are represented in brown monochrome behind or beside the birds.  The acts are shown as literal representations, allegory, or imagined portraiture.  Symbolism is included to help the narrative.  Occasionally I was able to slip some humor in.  As an artist I usually try to create beauty or show kindness.  This project was a real challenge for me.  Even when portraying horrors, I tried to depict the victims with dignity and humanity.  …At the rate of one drawing a day.

I give a short informal explanation of each of my drawings. I learned a lot of human history completing this project, and I try to explain my drawings in the context of that history. The birds are, well, just birds.
—————–

Pages featuring individual art pieces, the bird, and person the bird is named for (list is in alphabetical order):