Below in no particular order are some Frequently Asked Questions (FAQs) we get about Bird Names for Birds (BN4B).

The answers were written by the BN4B co-founders.

Who is behind Bird Names for Birds (BN4B)? 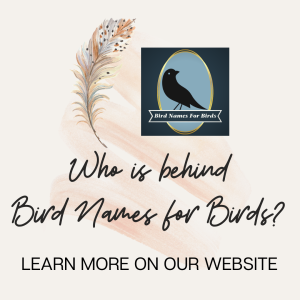 BN4B is a grassroots, community-centered initiative. That means BN4B is made up of You. Me. Bird Community members. Anyone. Everyone.

The initiative’s co-founders, account administrators and spokespeople, and historical biography contributors are listed on our About page.

We appreciate everyone who has spoken up about the issue, of all sides and perspectives. Like any issue, it’s useful to distinguish between the opinions of individual advocates or opponents and the views of the official account. The official accounts are identified on our About page. For official stances, statements, direction, etc., confer with the official BN4B website, accounts, and spokespeople. Otherwise, posts, comments, artwork, use of the hashtag or phrasing (Bird Names for Birds), etc., are representative of the individual(s) only, and not the official account. Every individual has the right to post what they want and how they want on their own accounts (social media, website, etc).

What is changing bird names really going to do? Why is time being spent on something so small when there are so many bigger issues? 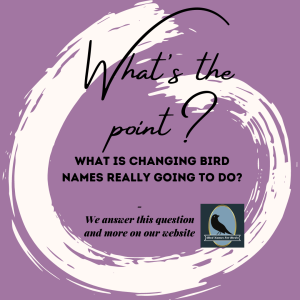 We fully recognize that this initiative will not end racism. We also recognize that there are many issues and concerns with greater impacts on the community. However, the impacts of colonialism are so far-reaching and intertwined within our culture that addressing them also inherently entails addressing many small, seemingly insignificant things. And even though bird names are a fairly minor issue, the pushback that BN4B has received—like most initiatives perceived as “politically correct”—is a strong indicator that this change is needed, and that as a community, we are not yet as open-minded or unbiased as we would like to be.

Ultimately, we want our community to be as welcoming and inclusive as possible. Overturning a long-held tradition that is rooted in colonialism simply to say, “You are welcome in the bird community, whoever you are” is all the reason necessary to have bird names for birds.

If you change bird names, you’ll be erasing history and forgetting the important contributions of these people. How do you suggest we deal with that? 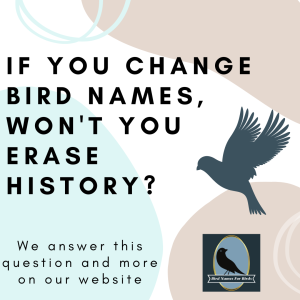 A bird’s name can describe many things. The name might reflect what it looks like (eg, Scarlet Tanager), how it behaves (eg, Greater Roadrunner), where it lives (eg, Greater Sage-Grouse), what it sounds like (eg, Eastern Wood-Pewee), or it might carry a person’s name (eg, Townsend’s Warbler). An honorific name is not provided to describe a bird’s attributes or to teach us about history, but rather to honor someone.

There is an important distinction between learning history and honoring historical figures. If teaching people about someone’s ornithological contributions is your goal, then there are better, more effective ways to do that than through an eponymous species name. Not only is it more practical to use descriptive names, but birds deserve better than being saddled with an eponym.

Why are you judging historical figures by modern standards? Why are you so critical of them, some of whom have made important contributions to birds, birding, and ornithology? 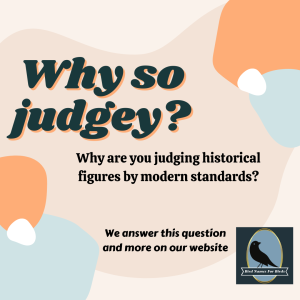 Societal change has only ever come about because a few people dared to speak up against what was considered normal. Living in a time prior to those courageous, outspoken people does not excuse someone from having accepted the status quo. The “modern standards” we now have could have happened sooner with more foresight, more audacity, and less resistance. Judging historical figures by their lack of discernment is a potent reminder to each of us of how our own decisions will be judged. The cautionary tales that these figures have set remind us to hold ourselves to higher standards. Our children and grandchildren will judge us one day as well for what we did—or didn’t do. Yes, times were different 150 years ago; information moved slower and was harder to find, education was more difficult to come by, and simple survival was far more difficult. But providing a pass to historical figures just because things were different or more difficult isn’t acceptable, and it perpetuates the idea that “slow change” towards societal equity is satisfactory.

Not every person honored with a bird name seems bad or concerning. Why can’t we just focus on the most egregious individuals and only change those names? 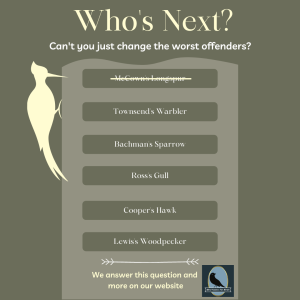 First, most of the people currently in a traditionally accepted role of determining official common names are White. For White people to determine what actions were problematic enough to warrant a name change is completely inappropriate and perpetuates the very system that BN4B is working to change. White people simply do not have the perspective to decide what is or isn’t harmful.

Second, birds are magnificent creatures, full of fascinating behaviors and exquisite plumages. Birds deserve to be celebrated for the evolutionary history that has shaped their particular traits, not for the moment when someone shot and dissected them.

What about other problematic bird names? Should those be changed? 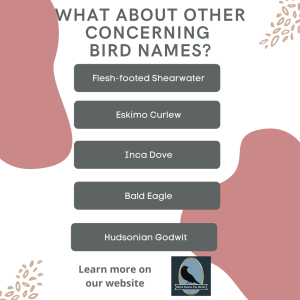 Flesh-footed Shearwater. Eskimo Curlew. Inca Dove. Bald Eagle. Maui Parrotbill (Kiwikiu). All these names have legitimate concerns associated with them, and some have even had name change proposals submitted for them (see our past proposals webpage for more info). Then there are so-called toponyms, or birds named after places; if a place is named after a person, like Hudsonian Godwit, should those names also be changed? The review of these names and the accompanying discussions are important and worthwhile, but BN4B is exclusively focusing on eponyms…for now. Eponymous names are a clear and well-defined set of names (the trick is to look for the “apostrophe ‘s’” in the name). Those names were all assigned in honor of a person, and the arguments for changing them are straightforward and clear-cut.

Why not use the birds’ Indigenous names as their new names? 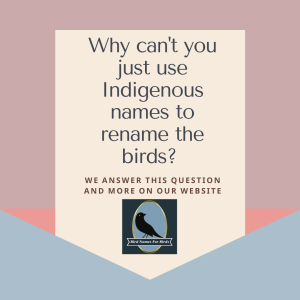 Second, birds often have ranges much larger than the area that is covered by a single Indigenous language, so there are often multiple names that a single species is known by (learn more about the Indigenous people and the occupied land you may be standing on right now: https://native-land.ca/).

Third, and most unfortunately, many Indigenous languages are endangered or extinct, and the species’ name may no longer be known.

What about Latin scientific names? Are you proposing to change those too? 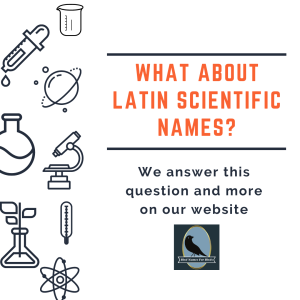 BN4B is currently focused on English common bird names. Binomial scientific names follow a separate process overseen by structures globally recognized to maintain standardization and archiving of species, and the same rules apply to every animal. BN4B isn’t necessarily opposed to scientific names being reviewed and changed, but the function of scientific names is inherently different and stability is crucial for that function. Common names are more arbitrary, tend to be more frequently used by non-academics, and have little archival purposes. Changing a scientific name would be like changing a social security number, while changing a common name would be like changing a last name after getting married. Both refer to the same individual, but each identifier has a different purpose and the ramifications of changing them are not the same.

What should the new bird names be then? 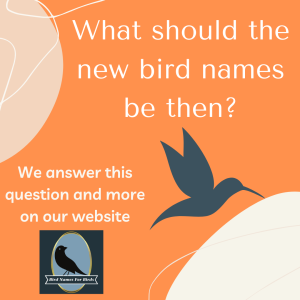 Talking birds is always the best, and brainstorming new name possibilities is certainly fun. Sure, we have opinions (who doesn’t?), but we don’t have the answers for new names. BN4B has been adamant about the initiative not proposing, highlighting, or emphasizing new name alternatives yet. We’ve suggested that new names should focus on natural history attributes of the species (e.g. plumage, behavior, habitat, etc), but we have stopped short of suggesting actual alternatives.The reason for that is two-fold.

First, the community is not all at the same starting line with this issue; many people do not believe that bird names need to change at all. For us to immediately focus on the “answer” would be to overlook the awareness and education that needs to happen. It’s arguably more important to understand why the names need to be or have been changed than what the new names will be.

Second, the core group of individuals behind BN4B (Jordan, Gabriel, Jess, and Alex) are White. As White folks, for us to say what the new names should be would be perpetuating the very system that we’re trying to raise awareness about and change.